Often referred to as ASTER (Advanced Spaceborne Thermal Emission and Reflectance Radiometer), this is technically the imaging instrument onboard the satellite Terra – the first Earth Observing System (EOS) satellite.

Terra was launched on the 18th December 1999 from the Vandenberg Air Force Base in California and flies in a sun-synchronous polar orbit, crossing the equator in the morning at 10:30 am. ASTER is one of five state-of-the-art instrument sensor systems onboard Terra. It has a unique combination of wide spectral coverage and medium spatial resolution in the visible, near-infrared through shortwave infrared to the thermal infrared regions.

ASTER consists of three different subsystems: the Visible and Near Infrared (VNIR), the Shortwave Infrared (SWIR) and the Thermal Infrared (TIR). The VNIR subsystem consists of two independent telescope assemblies. One is vertical looking and has three detector arrays collecting data in the visible green, visible red and near infrared wavelengths, while a backward-looking telescope has one detector array in the same spectral band as the near infrared of the vertical array. The two near infrared (3N and 3B) generate an along-track stereo image pair with a base-to-height ratio of 0.6 and an intersection angle of 27.7°, which can be used to generate digital elevation models (DEMs). 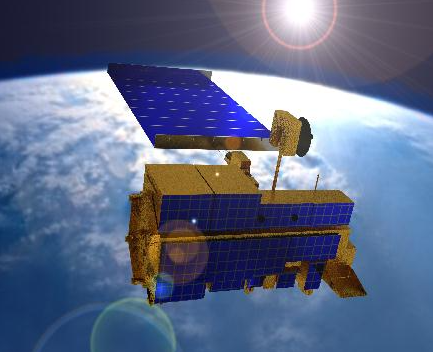