On 21st June 2010, TanDEM-X (TerraSAR-X add-on for Digital Elevation Measurement) was launched. The TanDEM-X satellite is almost identical to the TerraSAR-X satellite. Both satellites have been flying in close formation with only a few hundred metres separation (helix formation). Together they formed the first configurable synthetic aperture radar interferometer in space. 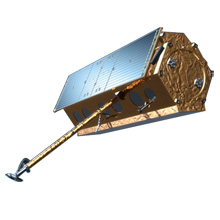 The TerraSAR-X & TanDEM-X mission has been engaged in a synchronous data acquisition and coverage where the Earth’s entire land mass was captured over a period of 3 years. This has resulted in the production of the WorldDEM dataset comprising a 12m posting elevation model with a reported absolute relative accuracy of 10m. Some examples are seen in the below image.